Is that a solar panel?

Yes. It is a 15W monocrystaline panel. 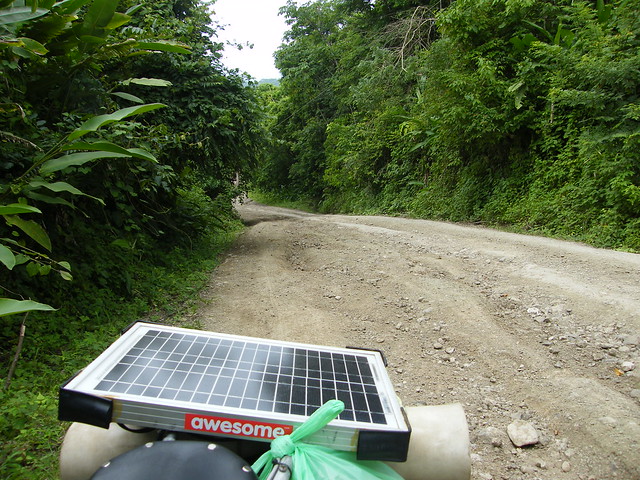 What is it for?

It charges my laptop, phone, camera batteries, lights, and anything else USB I might plug into it. It doesn’t drive the bike, which is entirely pedal powered. I bought the panel on ebay in the UK, and made the mounting for my bike and the battery charger.

Where did you get the bike / gear?

Do you cycle all the way?

Mostly. I took a bus through most of Costa Rica though, because the rain had started, the roads are particularly dangerous, and I wanted to get somewhere on schedule. I also took a bus to hospital one day in Guatemala.

Is it not hard?

It is hard. It is too hot and humid, often boring, and occasionally a bit uncomfortable, but actually with a Brooks saddle that is very minor. 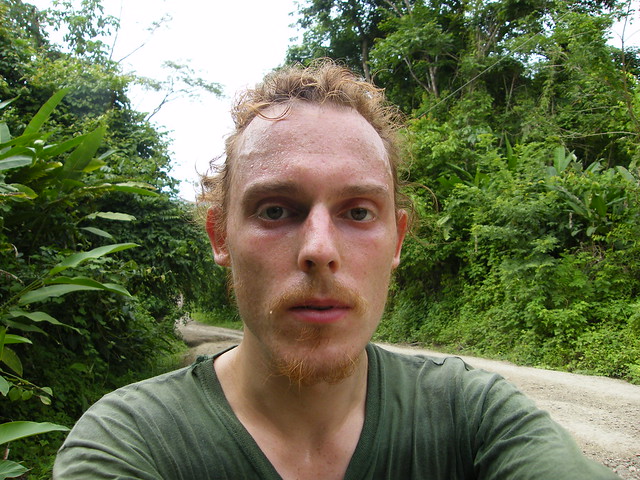 Have you had any problems?

This question is usually getting at things like robbery, mugging, etc, and is provoked by the almost universal fear of everyone else’s country. Some places are more dangerous than others, but that is not a good reason not to cycle in them, if you are aware of the situation and mitigate the risk. I have cycled through the some of the most violent cities in the world, which also have awful traffic and roads, and not come to any harm. In generally, the world is much safer than you think. Never listen to the negative opinion of someone who has never even been to the country in question! If they know it well, then listen, remember what they said, but take it with a pinch of salt.

You need to be careful about diseases, but once you have taken precautions, it makes no sense to worry about it. Be aware of malaria, dengue, various biting insects with other diseases. Avoid damaging the skin, and if you do take it seriously - keep it clean. Small wounds that can be ignored in Europe can get infected badly enough to end a cycle tour here. I have not had any problem with these yet.

What was your favourite country?

I quite liked cycling in Belize, and the sea and reef are beautiful. One thing I have learnt though is people’s opinion of a country is more a function of their mood at the time than the place, so you should not trust a small sample of answers to a question like this. Other people would tell you they hated Belize. Everywhere has things I like and don’t like. It’s probably more about what happens to me than the places.

What kind of bike do you have?

It is a Giant Coldrock, or maybe was, as I have replaced most of it, and even the remaining frame has been painted. It is a lightweight mountain bike without suspension, but with brazeons for front and rear racks. I use almost smooth tyres. Overall I think this is a very good setup for touring involving a fair amount of dirt roads. 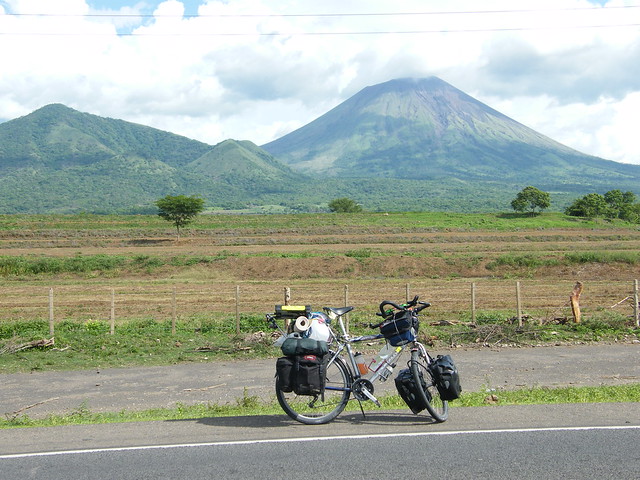 How do you carry your stuff?

In four panniers. These are special bags which hang on racks at the sides of the wheels. I also put some stuff on the rear rack, and in a handlebar bag.

How far do you cycle in a day?

Between 0 and 140km, I think is the most so far. It depends on where I want to get that day, the terrain, the weather, the temperature, what jobs need done, what I feel like…

What do you eat? 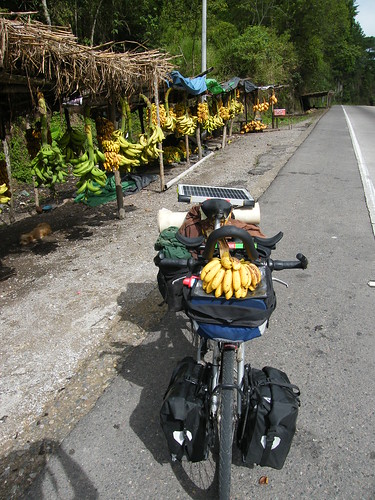 When cycling in remote places, mostly rice, pasta, vegetables, fruit, and sometimes bread. When there is tasty street food, I sometimes eat that. When in towns, I am probably more likely to go to a restaurant / comedor than to cook, except if I am in a hostel, where I can cook good food and not have to eat chicken, which is the only thing you can get in comedors in many places in Central America.

Honduras, the Banana Republic, lives up to its name.

Yes. When I have a kitchen I like to make something tastier. Normally I am limited to simpler pasta and rice based food on my petrol powered stove.

Blov Posts about my current tour, "Cycle Who"