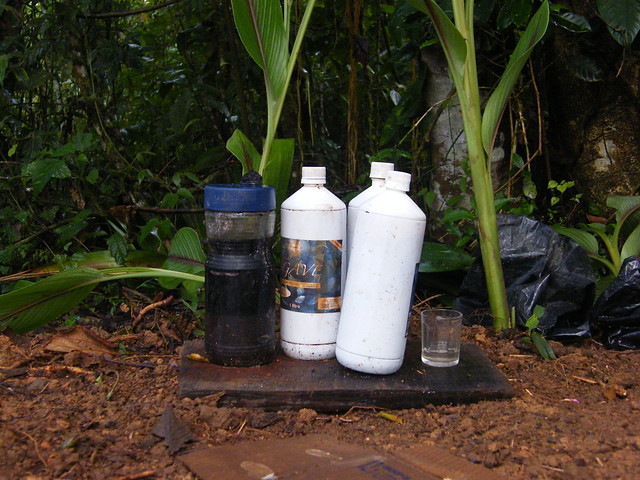 Burning bush? Yes, you can talk with plants.

It tasted like black treacle, but sweeter, and with a hint of marmite.

I had read “DMT: The Spirit Molecule”, and wondered if I would experience any of the common patterns. Maybe I would meet alien entities, or find myself in a nursery. Maybe I would learn the secrets of the universe. What is its true nature? What is it all about?

I started to feel the effect of the Ayahuasca in my body after the first dose, but did not notice any mental effect until shortly after the second, which was double the size and washed down with a glass of the bitter, astringent, Jurema. I am wary of mixing things, especially if I’ve not had them before, but these plants both contain the same chemically active ingredient, DMT, and spiritually I guess they are sisters so I thought they would be able to get along.

At first all was black, but then colour noise appeared - red, green and blue dots, always switching on and off. Then these formed into lines, which made up constantly changing shapes. They were square and triangular and zig zag. Seemed quite binary, angular, computer generated. The lines were in rainbow colours, the rainbows moved and sparkled. It was very beautiful. With open eyes, the picture seem quantised into simpler geometrical shapes. Leaves and gaps between them angular, and they moved like an animation with insufficient framerate. The images were very beautiful, and if I would have noticed pain, my face would probably have been hurting from smiling.

I enjoyed this a lot, but I didn’t just want pretty pictures. I wanted to learn something. I said this and asked, “what can you show me?”. I didn’t get a direct answer - no voice or character speaking to me - but the answer became obvious. You are a baby. You know nothing about how the world works. You’re not ready for that sort of thing. Here - play with the pretty sparklies. I realised I knew nothing, and I might as well enjoy it. When I accepted it, I realised that being a baby is wonderful. You don’t need to do anything or worry about anything. You are looked after. Like any mother, Mother Aya just wants her babies to healthy and happy.

I thought I was just happy because of the beauty, but then I realised it was not just beauty, it was love. I thought I was loving the pictures, but then I realised that was ridiculous - I am just a tiny spec - almost nothing - how could I produce so much love? It was clear that this was all there - an immense field of love - is this what everything is made of? I could only bathe in it.

Ayahuasca is what is politely called purgative, or cleansing. I was sick once. When I crawled out of the circle to vomit I felt like a snake. It was worse for the boy next to me though, who had diarrhoea which at one point splatted on my face. At first I tried to work out some way in which that had not actually just happened, but my attempt to deny reality was clearly not going to work.

There was a lesson though. I had been thinking earlier about how a baby has an easy life, but it does things like shitting and pissing everywhere. Now I experienced that this is not always enjoyable for everyone else who has to be around it. While it is good and right to be a baby when you have to, when you can you should grow up. I saw birds hatching and flying and making new nests.

I think it is clear that humans as a race are babies. How can we be told the secrets of the universe when we can’t even look after ourselves? We are shitting all over this planet and can’t even feed ourselves without making such a mess that it will kill us all and everything else that lives here. Maybe in a few million years, if we survive that long, we will will be ready to understand.

I asked someone to heat water for me so I could wash my hair and face. Someone else fed me chocolate. I could enjoy being looked after a little more, but tomorrow I must grow up.