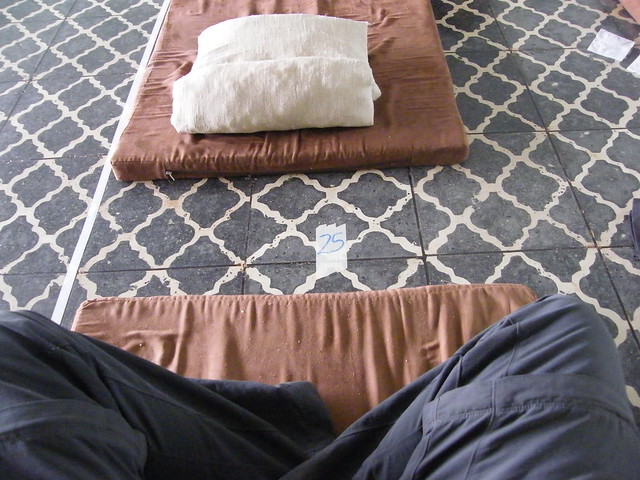 I spent 10 full days sitting on a cushion meditating, on a course run by S. N. Goenka (by audio recording) and his assistant teacher, Mirjam Berns, who was present in Costa Rica. I had heard about these courses several times from travellers over the past year and a half, and now I was near one I thought it was time to try it.

I didn’t really know what meditation was before this course and that is why I went - curiosity. There are many forms of meditation. I think what they have in common, at least those I know of, is concentrating on something. It could be an image in the mind, a sound like a mantra or drum, breathing, or in the case of vipassana, the sensations on the body. They have different purposes, the simplest being to develop discipline of the mind and an ability to concentrate. I don’t know much more about meditation in general though, so will talk about what we were taught on this course.

The first thing we did was ānāpāna meditation. This meant focusing on the breath, and specifically the sensations of it moving inside the nostril, and on the upper lip. It is not about controlling the breath, only observing it as it comes naturally. The purpose was to develop discipline, and improve our ability to feel sensations on the body. We did this for most of four days. It hurt, physically, especially in the knees because of sitting for so long. The pain was worse because there was no distraction. It was also very boring. I spent most of the time thinking rather than concentrating.

On the evening of the fourth day and for almost all of the rest of the course, we were taught and practised vipassana. This involves observing sensations all over the body. Sensation means any feeling such as hot, cold, itching, pain, movement of air, etc. While doing this, we were to maintain equanimity and the awareness of anicca, a Pali word which means change. Equanimity meant we were not to judge sensation as good or bad, not to be averse to pain, or crave pleasant sensations. We were also to observe that all sensations are temporary - they will go away eventually. This was one way to avoid reacting too much to the pain.

The theory is that, as Goenka says Gautama Buddha taught, suffering is caused by desire. This could be craving for something not there, or aversion to something that is. By learning to avoid these feelings, suffering can stop. I wondered why just observe the sensations on the body? The idea is that all thoughts or emotions will manifest in the body in some way. By learning not to react to feelings in the body, all reactions should be covered.

The reactions of craving and aversion are called sankaras. They also said that sankaras build up - there is a store of old ones. This causes continued suffering, and rebirth. If you can get rid of them all, then you will be free of suffering and not have to be reborn. They said that when you stop creating new sankaras, the new ones come to the surface, and if you remain equanimous, they disappear.

I found that they did surface. I had maybe five or so in total. When my mind was clear, they would come suddenly as an image or word out of nowhere, not connected to any previous thought. The first one I had, for example, was the image of a dropped mobile phone. Obviously I felt some aversion or pain that I may have broken an expensive thing.

The sensations on the body can be of two types. “Gross” and “subtle”. The gross sensations are things like pain. There is also a feeling that I got when there was nothing else, a slight pleasant tingling. When this happens all over the body, interesting things happen. At one point, briefly, on day eight I think, I felt my whole body shaking, and oscillating around a vertical line through the middle. It was rather like a feeling I have had occasionally when falling asleep - the whole body spins.

The interpretation given by the teacher was that the subtle tingling is you feeling subatomic particles, and that the shaking and vibrating is feeling the underlying fabric of the universe. There is a common idea amongst some spiritual people that the universe is fundamentally “vibrational”, and improving you life or increasing your consciousness means to operate at a higher frequency. They never say what it is that is meant to be vibrating though. Maybe it is something like string theory. Maybe that’s where string theory came from, I don’t know. Anyway, I don’t take this feeling as evidence of the nature of the universe - it could also be explained by the brain failing to function correctly after being subjected to this unusual practice.

If you practice more, it is possible for the effect to go much further. Rather than just the surface, if you can feel only subtle sensation inside the body as well, then it can feel like the whole body has dissolved. As far as I understand it from asking people, you don’t really feel a physical body anymore.

As far as I practised the technique, I did have experiences consistent with what the teachers said. I don’t see any reason why they would lie about the rest, so it seems that with further practice I could experience, or think I was experiencing, the universe at a more fundamental level, and free myself of suffering. Maybe I would even clear old sankaras from past lives, which when it happens apparently allows you to remember those lives. I still don’t know that I agree with all the theory though. One thing the teacher said on one of his talks though, was that if you don’t like the theory just ignore it - the practice will still work.

Will I keep practising? They say you should do two hours a day. I’m not sure. I can see that there could be benefits, but on the other hand it hurts. This is not relaxing, it is not easy. It is physically and mentally painful and unpleasant. I had a rather unpleasant image at the end of the course and decided to give my mind a rest for a while. Maybe I’ll try it again sometime, but I am not very keen. On the other hand, if the theory is all correct, this technique is how I can free myself from suffering and escape the cycle of rebirth and endless suffering, so if true it seems that it is the most important, or only thing I should do. That would mean becoming a monk, or at least devoting significant time to meditating.

I also want to describe the way the course was run. It was like living the life of a monk for 10 days. Men and women were separated. Talking was not allowed. Food was eaten at breakfast and lunchtime, but not after 12pm, except a little fruit for new students (those on their first 10 day course). Reading, writing, music and any other communications were not allowed. Really, there was nothing to do but meditation, eat, and rest. The teaching was almost entirely from S. N. Goenka, in the form of audio recordings. Sometimes he taught during meditation sessions, but he spoke mostly in the evening discourse, which was sometimes a lesson, and often rather like a sermon. On the last full day, the tenth, we were allowed to talk again and genders were no longer separated in some public spaces. Everyone seemed quite happy to talk, but I found the noise rather overwhelming initially.

On the last full day I saw a sloth! It was climbing a tree right beside the path in the centre. I have never seen one before but I like them. I like how they are lazy and imagining that they just hang out in trees all day being fluffy and cuddly.

I got the bus back to San Jose the next day, the eleventh, after tidying up and things in the morning. I didn’t want to think about meditation or do it more. On the bus though, I found my mind was very quiet. I tried meditating for lack of anything else to do - I didn’t want to read or write - but I couldn’t because of the movement of the bus. It covered the sensations in the body I was looking for. Maybe it is acceptable to feel the bus shaking you around. Anyway, I didn’t want to think about it or write about it for some time and did other things until now, just over a week later.