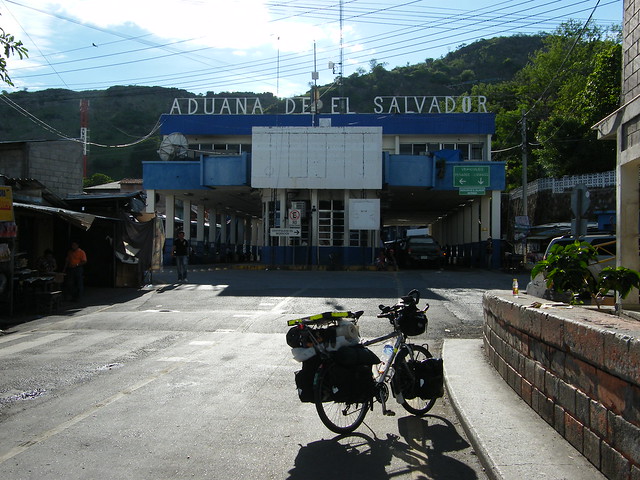 My route through Honduras did not leave very good options for visiting El Salvador. To ride from one end of the country to the other, I would have to go back north through Honduras. This route would be through the mountains - hard work. It had also started raining now, and I didn’t feel like it. However, it was not far to the border, so I thought I might as well just make a short side trip to tick the country.

I decided to head for La Union, a town on the cost, from which I could maybe explore some islands or get a boat to Nicaragua.

As I was riding down the road, I realised that this must be the one Mark Beaumont skipped because he thought it was too dangerous. He took a car from El Salvador to Nicaragua. Then I remembered that he said something like, “this isn’t a place to hang around in”, about what must have been La Union.

I got through the rather dodgy border without incident. All borders around here are dodgy but at least this one had windows - you didn’t need to go inside, where they usually insist you leave your bike out of site. I was trying to get to an hotel in La Union - I knew there was one from another blog. I wasn’t going to make it before dark though. I asked some police at a checkpoint and they said to go to the police station at the junction on the road down to La Union. I did so, and they said they would need to check with the boss. In the mean time, they gave me a lift into town to get some pupusas. They said it was not a safe place, and not a good idea to by cycling around here even during the day. While I was waiting for my pupusas, they were standing watch from across the road, one of them with his hand on his holstered pistol. I spoke to a guy when I was waiting. He also said he would not recommend cycling around here, or in Honduras, but further south was safer in Nicaragua, and Costa Rica.

After we got back, someone put a mattress in the front office for me. I slept adequately. Also, I had a wash the some way they did - by pouring buckets of water over myself. I think it is probably more effective than a shower - much greater water volume is achieved quickly.

I still hadn’t decided where to go next. The options were try and get a boat to Nicaragua, or Honduras, cycle up the coast and maybe find some nice beaches, or go back the way I came. I was put off cycling around here by the warnings, and one man said the beaches near here were not very nice anyway. To get a boat I would need to go into town and search for it, which might not actually exist, or be too expensive.

The next day I decided to go back the way I came. I hitched a lift part of the way, to the junction where this time I took the road for Nicaragua.

I should add, to avoid giving a totally negative impression of the country, that most cyclist come this way, and they seem to like the coast and beaches. Apparently it is a great place for surfing.