Honduras is a funny country. I couldn’t find its identity. Most countries have some stereotypical things about them that you can think of, like clothes, or food, or music, or some quality of the people. I had no idea about Honduras before I got there, and I still didn’t when I left. It seems to be some sort of generic Central America, with a great influence from the USA, and not much of its own. It was however the home to some of the most exciting and dangerous riding I did.

San Pedro Sula has at least some years been rated the most violent city in the world. It is controlled by drug cartels. Someone I met later who had to go to hospital there told of how he was asked to sit on a trolley which was covered in blood. Apparently the staff thought this was pretty much normal, because it was full of people who had been shot. The Daily Mail says there are 3.3 murders per day, and will show you pictures of this if you care to search. Riding through the city is not really something to be recommended, but there isn’t much choice but to cross it somehow.

I wanted to make sure I got there before dark, so I left early and didn’t muck about. Approaching the city I started to see the cars with blacked out windows and no number plates. Some are often fitted with bulletproof glass, which I saw advertised. The driving standard was not good. I got the impression from the way I was passed that everyone just drove as if I was not even there. Several times I would have been hit if I had not ducked out the way at the last minute. I heard that to take out a hit on someone here costs about $25, so the value of my life was less than what it might cost someone to fix some scratched paint on their car.

On the outskirts of town I stopped in an Honduran fast food type place for a second breakfast / mid-morning meal and was amused to see a gringo who looked pretty much exactly like a CIA agent from a Bond film. I doubt a group of three middle aged men, each arriving here in their own vehicle to meet in an unnoticeable place on the edge of town were on holiday, anyway.

In town, a car full of girls were shouting and taking photos of me. Apparently the girls like gringos here, or possibly people crazy enough to cycle.

I found my prebooked hostel fairly easily. It was surrounded by a high wall topped with spikes, razor wire and an electric fence. They told me this is an affluent residential area. Leaving the hostel meant taking a taxi to the mall, which was a relatively safe place where only rich people could go. There were armed guards of course. The banks had lockers outside for you to put your pistol in before you entered, and a few larger ones if you had a shotgun.

I read a spoof story about the opening of the city mall, in which the people stormed it and cut up the benches for fire wood. I can almost imagine that happening - just up the road I had seen people carrying bundles of wood on the back of their bikes.

One day I decided I wanted to see this city, not just the American fast food chains that lined the circunvalacion I rode down. I cycled into centre of town. On the way I saw a naked man kneeling with his hands in the gutter. At first thought it was some sort of extreme begging, but he was facing the traffic, and was ignored. Maybe a yogi? But why practice yoga in the gutter?

I had some idea about wanting to sit in a cafe in the main square but there was only a McDonald’s there too. Money changers and aggressive “Professional Photographers” stalked in the zocalo.

The next city was Tegucigalpa, the capital. Here it was ok to walk outside, in some areas, but not at night, so more taxis to Pizza Hut, which has a salad bar which will feed a touring cyclist for $5. The approach to the city though, was the most exciting and dangerous cycling I have ever done.

From San Pedro Sula, I had to cross mountain passes, maybe 1500m of climbing at a glace at the profile. This gave a long fast descent, which continued down from the mountains into the city. Here there was extreme high speed traffic dodging including overtaking at least two motorbikes, and avoiding the wheel sized manholes which had their covers stolen for scrap metal. When it levelled out, I was then navigating back streets in one of the most dangerous cities in the world, all under time pressure to make sure I had somewhere secure to sleep before it got dark.

In La Ceiba, I came the closest to being robbed (that I know of). Someone tried to get my camera out of its bag while I carried it, but he was very ham fisted and I felt the tugging. Here was also where I found myself surrounded by three armed guards.

I went to a mall to buy some new sandals because my last ones had fallen apart. I was sitting on a bench researching it on my phone, when one of them objected that I wasn’t allowed to be there without shoes on. At first I decided I didn’t understand him. Then he went and got two of his mates. So now there I was, barefoot sitting on a bench, and surrounded by three armed men. I considered seeing what would happen if I just sat there - a protest against the ridiculousness of it - but as I happened to be there to buy sandals anyway I decided to go and do that now. So I remembered how to speak Spanish, and they agreed to let me buy some, but not on my own. I was escorted by one of the guards to the shoe shop, and he waited outside until I came out with them on. Of course noone would actually tell me why.

On Utila, one of the Bay Islands of Honduras, I learned to scuba dive. I wouldn’t really consider this Honduras though. It was British until quite recently, and is only really officially Honduran. A Honduran I spoke to in La Ceiba said if he wanted to get the ferry there, he would be questioned first, under the assumption that his purpose was to rob the gringos.

This was the same guy who tried to befriend me and walked around town with me for about an hour before asking for money. He kept asking what I wanted - weed, drugs, women, … He seemed frustrated that I didn’t really want anything - I suppose this is what the consumer society is all about too - make people want things so you can control them - or in his case make some profit. At least he did help me by telling me not to go for a walk down the beach, which was going into a particularly bad area controlled by the crack dealers and pimps.

I did a a river rafting trip one day, which turned out to be rather more serious that I expected of a typical organised tourist activity. Maybe because I was on my own the guide didn’t hold back. It involved a a non-trivial partly overhanging rock climb out of the river, to a ledge he told me was 11 meters above the water, and then jumping into the rapids. My heart really was pounding before I did this, but really I had no choice - I certainly couldn’t climb down - I only just made it up, and there was no other way down. This was not an old lady tour as it appeared in the brochure.

Honduras was also a country of buckets of water. Buckets for showering by pouring it over your head, and buckets for flushing the toilet. The showering is actually really good - better than a conventional one because you get so much more water in one go, but I didn’t much like the toilet flushing this way. Before I had worked out this was what was done, I did a jobby in a restaurant and couldn’t flush it. They had given me some food for free “a present”, so I thought I would be leaving them a present in return, but later realised there was a barrel of water outside.

Honduras is the country where I first encountered bedbugs, lack of basic plumbing, US fast food beside starving beggars, and some fear at what I think was an actually real threat of violence, but it also has islands also look like this, 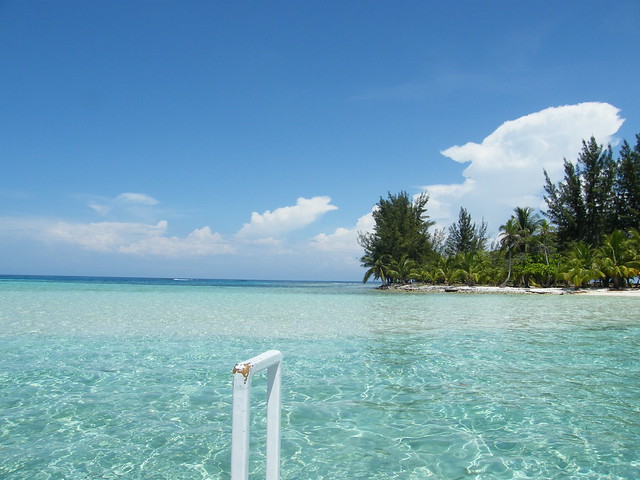 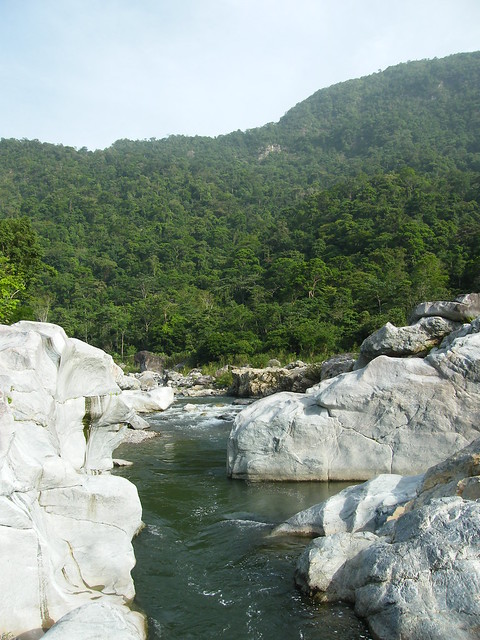 in which the locals also bathe and wash their clothes, presumably because they have no other choice.