I have dreadlocks. The first one appeared on the 1st of December 2011. They are more interesting than just hair, and I am still learning from them.

Not many people in Scotland have dreads. One of the first times I remember seeing them was at my first university mountaineering club meet. She had long blonde dreads. I didn’t know what to think - I didn’t think - but I felt like she was some magical creature from another dimension.

When I went to the Canary Islands a few years later, I met lots of dready travellers. One morning, I woke up on the beach. I washed my hair and applied conditioner and hairbrush to stop it knotting itself up. This was rather a fuss. Other people just got up and were ready.

I noticed some other practical advantages. They are a good way of identifying people who might be interesting to talk to. There is a good chance someone with dreads is a fellow traveller, or will know things like where to get free food and good places to sleep, where the squats are, and the local juggling club. It’s sort of like a club itself - when you notice other people with dreads on the street, you can say hi.

In Belize I discovered it’s a bit more than that, because people think you are Rasta. Many people confuse the terms, and call the hair “rastas”. Really, Rasta is a religion, and dreadlocks are commonly worn by people who follow it. You can have dreads without being Rasta though, and you can be Rasta without dreads. It’s probably better not to argue though, when someone is so happy to meet a Rastaman, and blesses you in the name of Jah.

I think Belize must have some of the friendliest beggars in the world. “When I see you I don’t see a white man. I see a brother from another mother.” Yes, he then asked me for money, but I don’t think it totally invalidates what he was saying. As the only white man in some of the places I visited, the locks made me feel a bit more comfortable, and perhaps the locals where a bit friendlier because of it. I don’t know for sure, of course.

I never really decided to get dreads, but I was thinking about it and mentioned it to people. One night in the marina in Las Palmas, the night before Mariella was going to sea, heading for another continent, she took a wooden bead from her hair and gave it to me, “for when you get dreads”. I asked her to braid it in for the moment, but she actually made my first dread while we sat on a boat under the stars. The rest followed. Many of them were made by friends, and they are named after them.

There are other ways they record memories. I have other beads in my hair, and know where they came from. Some are ferrite cores from a recycled computer in La Tomatera, a wonderful squat I lived in for a while. I remember hacking the machine apart, and wrapping enameled magnet wire around someone else’s hair.

A guy who made one of my dreads swaps his with people. They cut one off, swap and reattach with a crochet hook. When we met, he had thirteen different people’s hair on his head. The variety of colours looked beautiful, and each was a memory and a connection to a friend.

Dreads are like living things. They grow and change. They develop kinks and twists, or straighten and flatten. They can join together or be split apart. They also look like leaves, or grass, or tree branches or coral. They exhibit gnarl.

There is a saying, that dreads grow in, not just out of your head. They grow into your brain. People see you differently, and this no doubt changes your behaviour. I started eating a vegan diet a few months after getting dreads. I’m not saying dreads caused a diet change, but maybe they are somewhat related.

I think dreads are strongly associated with spiritual, or conscious people. By conscious, I mean people who do things having given thought to their effects, rather than by default. Food is a good example - I find it slightly strange when I see someone with dreads eating meat. This also means doing things because you think they are right, not because society told you to. Many parts of society would avoid someone with dreads, for example I guess it would be harder to get some jobs. This also shows commitment to doing what is right - not sacrificing principles for money. Someone told me that in India, if you dreads are long enough to wrap round your head three times, you can travel on the trains for free. They respect a commitment to a spiritual life.

I think the main reason I like dreadlocks though is because they are beautiful. It is hard not to just stare and wonder at all the shapes, and maybe colours, that they form. 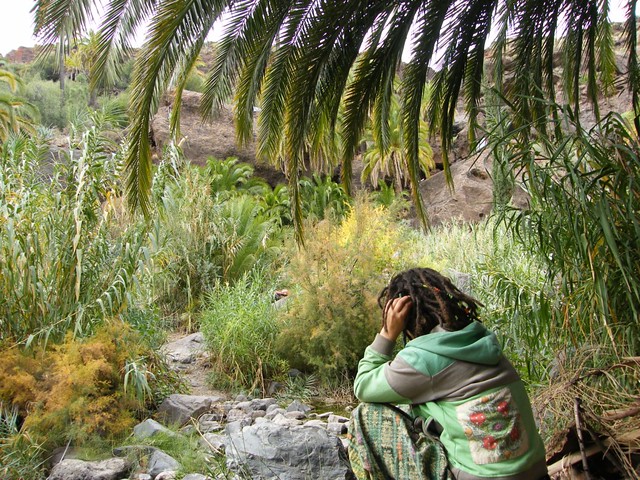 A few days ago I was sitting on the street one night in a village by the Pacific Ocean in Costa Rica. Someone was talking about getting dreads again. I made one impulsively, under the stars.