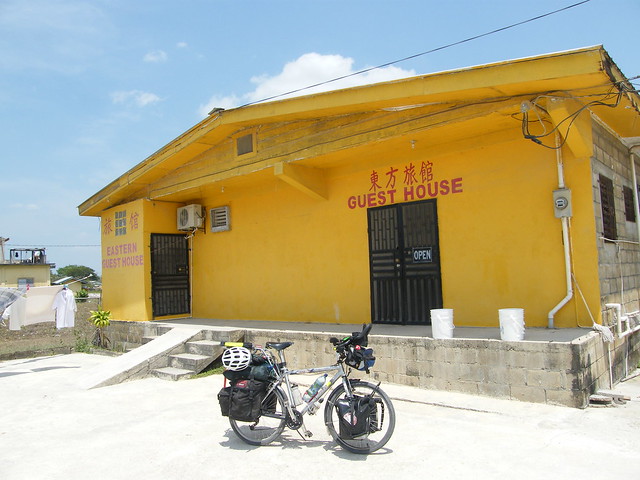 I passed the Shanghai service station. This was after all the Chinese shops. Nearly all the shops are Chinese. Belmopan is a dump (I’m in Belize now). I read there was not much there but government buildings, but there really is nothing. I was expecting at least a zocalo and a coffee shop. No.

I found the “Eastern Guest House” - the English translation under the Chinese. The concrete floor was covered in ripped plastic, hair and dirt. I wheeled my bike in, with the Chinese cow still hanging on the back. The bathroom hadn’t been cleaned. I brushed my teeth with Chinese toothpaste.

In the morning, I left. I should have made more effort to learn Chinese from Fengqin, then I could have asked for directions to somewhere for breakfast. I only knew how to ask for the cat temple.

Later I passed Japan, and Santorini, a Greek island. I sat down in a restaurant to Caribbean food and Spanish conversation at the neighbouring table.