I stayed at Bella’s hostel in San Ignacio. My room had the feel of a log cabin, with a bookshelf beside my bed. It was built to a design, not bashed together like the constructions I was used to in Guatemala. One night became three. “Stand in your truth”, said a fairy in the bathroom.

I was invited to visit the farm. It was down a road which headed into the jungle, but here was mostly farms. The government gives away land here at election time, if you vote, or if you don’t want land you can have money. If I’d gone further, I’d have reached an army base (“bring cigarettes and rum”) and later Caracol, a Mayan ruin. I stopped at the farm.

Ernest, a very friendly and relaxed, presumably Garifuna, man gave me a tour of the medicine trail. This was a path through the jungle with signs on many plants with medicinal uses. I picked some leaves which I later used to make a poultice for the wounds on my feet. I also met the pig, who was very happy and wagged his tail when sprayed with water from the hose. I saw some pineapples growing on the ground, and plenty of chickens. 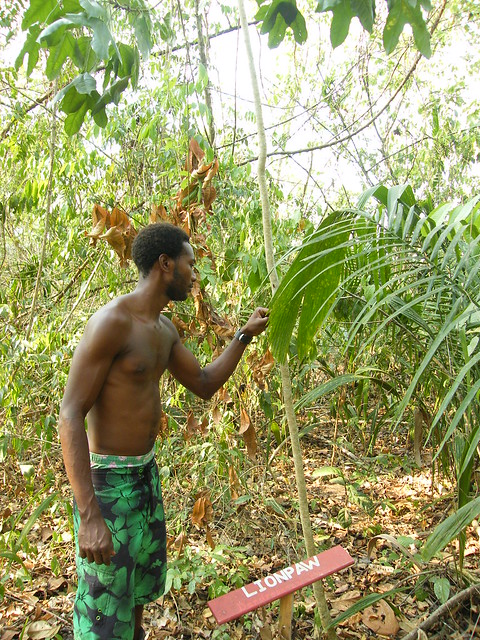 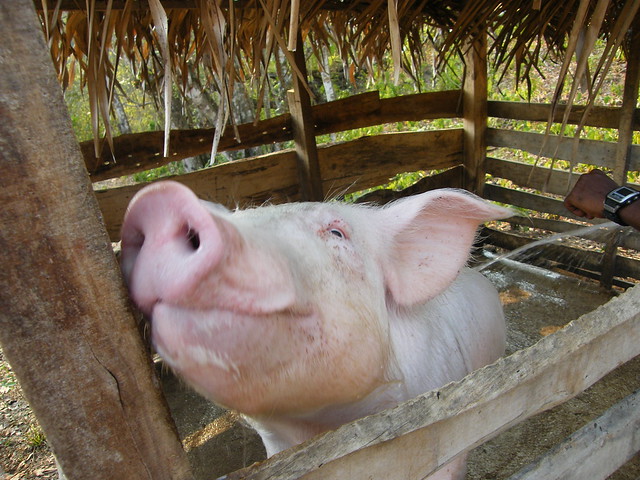 I spent the rest of the evening lying in a hammock at the top of the hill above the river. Not much happened. The sheep grazed. The sun set behind the hill.

Bella wasn’t the woman who seemed to run the hostel, or the crazy skankin rastaman who helped. It turned out Bella was a beautiful little rasta girl. She ran around and cartwheeled through the kitchen, with dreads flying. “Do you do your dreads yourself?”, I asked. “No, my mum does. I see you try”. I got out the crochet hook and worked with that while I watched Forest Gump. “I just felt like running.” I just felt like cycling.

In the morning I didn’t leave at 5am, as would be sensible to avoid the heat when cycling. I spent some time sitting by the river, meditating, and listening to the birds. I heard a toucan, and the screeching one which sounds like a piezo buzzer. The turtles were hiding, or maybe they were all on the wall at the hostel, where their backs painted in rasta colours told everyone to “DO YOUR DISHES”.