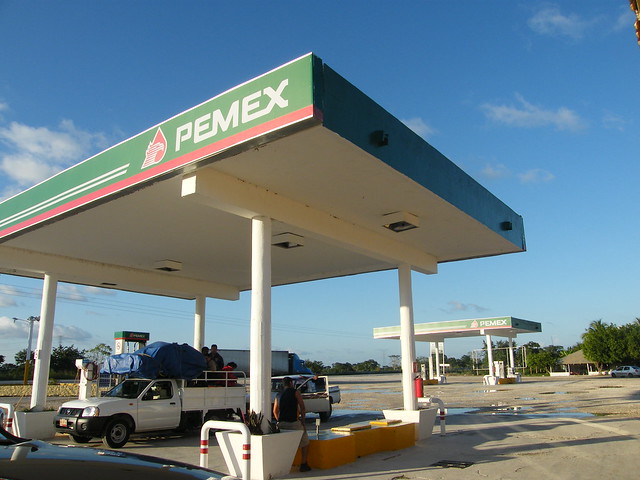 Before I really started cycling here in Mexico, a couple of people told me they camped and hammocked at PEMEX, the only brand of petrol station I have seen so far in Mexico. I thought that sounded a bit crazy but that is because I had only toured in Europe before.

In Europe, I found I could camp almost anywhere by the side of the road. There might be a forest, or a field, a picnic spot, a public park or even a campsite. Here the roads I have seen so far are lined by ditches and fences unbroken for miles. The slopes to the ditches are often very steep, the ditches quite wide and full of water and then there is a barbed wire fence on the other side. Getting the bike across this would be very difficult. Getting self over would be possible, but would involve getting wet, muddy, and possibly injured. There are venomous snakes around here, ticks and maybe leeches. It generally is not something I want to do.

Last night I found a small space between the road and the water. I stopped there because I saw some flatter ground. I was not the first to notice it though - there was an old camp fire, and lots of rubbish. I moved down from the road a bit for cover from sight. I thought it would be better not to be seen because that was my only defence against robbers. Down here though was where people had been using as a toilet and rubbish dump.

In the morning I had to get the bike back up the slope, which was not easy. Then I spent probably spent half an hour stopping and trying to work out what was making a scraping noise as the wheels turned. Eventually I found a piece of wire stuck in the back tyre was scraping on the inside of the mudgaurd. This and the sticks that jammed in the gears are more reasons to avoid these sites.

If you want a flat site with short grass (to avoid snakes) it seems like the only option usually is to ask at someones house to camp in the garden. This can be quite successful - I did this the night before and was also given a meal. Some people at the Rainbow told me they had done this and it happened to be the occasion of the Granny’s 101st birthday. A pig was slaughtered for them and they were basically forced to stay for two days eating and drinking.

The other option though is a petrol station. Now that I have seen one it makes sense. I’m camping now on a large area of flat, short grass, about 20 meters from the hardstanding. I can see my bike locked near the pumps, lit and under cover from rain. There is a toilet, sink for washing, food and water right outside. There is also a useful amount of light but not so much as to stop sleep.

In Europe, I would avoid a petrol station as noisy and possibly dangerous and camp somewhere quiet. I also think of them as expensive and of course supporting an oil based system. But now I look out of the tent and the PEMEX sign is like a marker of an oasis. This and the glowing traffic cone landing lights, are beautiful.