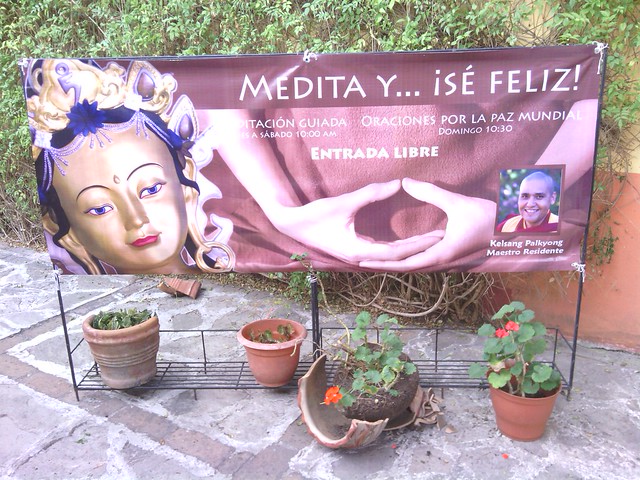 I noticed this Buddhist centre when I first came to San Cristobal. I am now living very close to it so there was no excuse not to have a look. They have a “guided meditation” each day at 10am. On Thursday I went to it.

The main room or hall of the centre had a shrine at the end, with cushions on the floor at the front and some seats in rows behind them. The shrine had golden Buddhas and Bodhisattvas, 3 sets of 7 water bowls, a chocolate bar at the right side, and various other things. On the wall behind the central Buddha was a portrait of Kelsang Gyatso. Another, lager, portrait of him sat in front of the Buddha. The way it was displayed reminded me of pictures of Saddam Hussein in Iraq.

The session was not what I was expecting. The type of meditation I have encountered before is about presence, silently concentrating on the senses and body. This was mostly chanting with a few shorter periods of silence to contemplate what was said.

It was surprisingly like a christian church service. There was the equivalent of a hymn book for the chants or songs, and it followed a set program from the book. The main difference was there were some periods of silence to contemplate. I’m afraid it also felt rather like church - something you go to because you are required to for some reason but you don’t actually feel anything or get the point. The order of service if you can call it that was from a book by the founder of this type of Buddhism. I read the book afterwards in a couple of hours and then researched it more on the web.

I discovered that this place was of the New Kadampa Tradition (NKT), founded by Geshe Kelsang Gyatso in England in 1991 and now based in the Lake District. This form of Buddhism seems to be somewhat controversial, and has some aspects I do not like and which are somewhat suggestive of a cult. It seems people are taught only to read the books by Kelsang Gyatso, and I noticed in the centre all the books were by him.

The only book that did not have his name on the cover was by the Western Shugden Society, which seems to be mostly run by Kadampa Buddhists. The worship of Shugden seems to be a controversial issue. The Dalai Lama banned it, but Kelsang Gyatso supported it.

I also found a story about a monk being financially exploited, and there are websites for “recoverers”. I don’t know if these indicate systematic problems, but the fact that there is an official site which tries to defend against various accusations does not look good.

In any case, it does not matter what the organisation is like unless the teachings are good. Kelsang Gyatso seems to be distinguished by designing a clearly organised 21 step meditation plan, or lamrim in Tibetan, which I read in one of his books.

Many of the steps seem like a good idea, but there were a few I really didn’t like, which I will point out below. This post may seem rather negative because of this, and admittedly I was looking for problems. I think this is important though, because I do not want to spend a lot of time on something if there are basic problems with it. I don’t know how much of this is specific to NKT and how much is common to other Buddhist traditions.

The first point is entitled “Our precious human life” but in reality it is designed to instil fear!

The fear he is talking about is that of a lower rebirth. I should explain samsara - the idea that we are trapped in a continuous cycle of death and rebirth. This is common to many religions. Birth can be in any of six realms - God, demi-god, human, animal, hungry ghost, and hell. Buddhas have escaped from this cycle, and the idea is that by following the lamrim, you can achieve this.

Christian Heaven and Hell seems like a special case of samsara where the number of births is exactly two, or possibly three if purgatory counts as one. Churches use fear of hell as a method of controlling people. It seems here that fear of lower rebirth is being used to convince people to follow this path.

I don’t like this idea of instilling fear because it is not something inherently good and it can be abused to control people. Is it really necessary to invent something for people to fear? Are there not enough problems readily apparent that we can fix? I can certainly see things in my life which I could improve with some Buddhist teachings without having to fear hell. Rather than creating fear, then running to Buddha and your guru (“taking refuge”), don’t unnecessarily create fear to start with. You can still learn, reduce existing fear, and love.

All of this assumes that samsara exists. I tried searching for evidence of this, or even where this idea came from, but I didn’t find anything convincing enough to base my life on it. Perhaps this is the religious part of Buddhism - something you are just required to believe without evidence.

I found this on someones livejournal

“Getting back to the NKT, I would advise anyone reading this to stay well away from it. If you don’t and they get you inside, you will find yourself locked in beliefs and fear. You will be overloaded with practices and commitments prematurely, and then you will be afraid not to do them for fear of hell. Once you’re deeply submerged in the NKT, it is very difficult to get out again, because in a way you get brainwashed.”

Gyatso would also have you meditate on death.

“I shall definitely die. There is no way to prevent my body from finally decaying.”

This seems negative and may cause fear. Some people argue it is not even true that you must die. Maybe it won’t if you don’t believe it, or if you become more than a normal human. Again there is a more positive alternative. Instead of saying I must work hard because I will die soon, think, I will work hard to improve my life now. This works whether you believe in rebirth or not.

He claims that it is necessary to have a spiritual teacher - it is the only way. I won’t say that it is not helpful to have a teacher, but I object to the idea that it is absolutely necessary. Where did these teachers get their knowledge from? It must be discoverable. The Buddha did not have a Dharma teacher. Yes, he probably had several teachers he learned from, but he moved between them and thought for himself to develop his ideas. He did not swear loyalty to one guru who told him never to read the books of someone else.

I read that some schools practice guru yoga or worship, basically treating a guru as a god. This doesn’t seem like a good idea to me at all.

They also seem a bit obsessed about the lineage of teachers - students becoming teachers and continuing the line. I think they see this line leading back to Buddha as something to establish their legitimacy.

“I did learn a valuable lesson from it all, which was not to believe anything that didn’t depend upon experience, otherwise you get trapped in fear. And I learned to be self-reliant, not reliant on some Guru without thinking for myself.”

The book is filled with definite statements which are clearly not true. For example, that following this lamrim is the only way to give your life meaning. It is obvious that I can do many valuable things without practising Buddhism. The requirement for a guru is another example.

“We need to practise Buddha’s teachings because there is no other real method to solve human problems.” - Geshe Kelsang Gyatso, “Modern Buddhism”.

Obviously this is not true either.

On the positive side, the rest of the steps of this lamrim may be good ideas, although I have not read about all of them in enough detail. They include loving everyone equally, believing in the kindness and love of others, avoiding attachment, compassion and cherishing others rather than yourself.

They seem to be partly a way to sell “Buddhist Holidays”. The retreats they are selling in Mexico are about 100 GBP a day. For comparison I pay about 75 GBP a month in rent for rooms here.

The lama said we were invited to a lesson. I went. Afterwards I was asked for money, “only if I had it”, but they asked several times. I didn’t want to pay for something I thought was free.

Unless there is good evidence for some pain after death it does not make sense change your behaviour because of this. Focus on fixing real problems you have now.

One needs to be very careful in choosing gurus.

Whatever the nature of the teachings or philosophy, there is a great risk of corruption and exploitation when a large organisation is created around it. Good people can be corrupted. The power a guru can have over his students can also attract people who intend to abuse that power.

There are a great variety of practices and beliefs within Buddhism. You need to research the specific teachings of different teachers rather than rely on a simple label like Buddhist or Kadampa.

I should research other forms of Buddhism to see if there is one with less religion, power and fear, and more useful lessons for living this life.