I could feel something today. Some energy in the air, like something was going to happen. Everyone could feel it. The wind was building and shaking the trees. It had been building for days.

The wind drove us to eat in a huddle in the camp, sensibly breaking the protocol of eating in the exposed, sandblasted, main circle. It felt like a tribe coming together in the face of adversity. It was. The wind blew all night and bounced my hammock.

The next morning, I broke up with my girlfriend. We were sitting in camp. As I was talking, something hit me in the back. A girl sat up in my hammock. My now ex-gf left to make her own camp, and I talked to my friend.

She was sleeping there, she told me, on account of being very tired from the previous night’s activity. She had sex with a guy she liked, and the girl he was with. She felt very free now. Free from jealousy, ego and social limits. It sounds like it was a very liberating experience, and a cleansing from the past. Past problems blown away with the wind.

Later, I was dwelling on the past. As I was thinking about what went wrong with the gf, ruminating, a pan whacked me on the head. Stop it! Be present now! The wind had blown it from the tree.

That night, there was an orange glow in the distance. With the wind coming from there, it was not long before it brought the fire to the camp. Everyone was driven out. Anything left behind was burnt. Many people lost things, attachments maybe, and many moved on that morning. 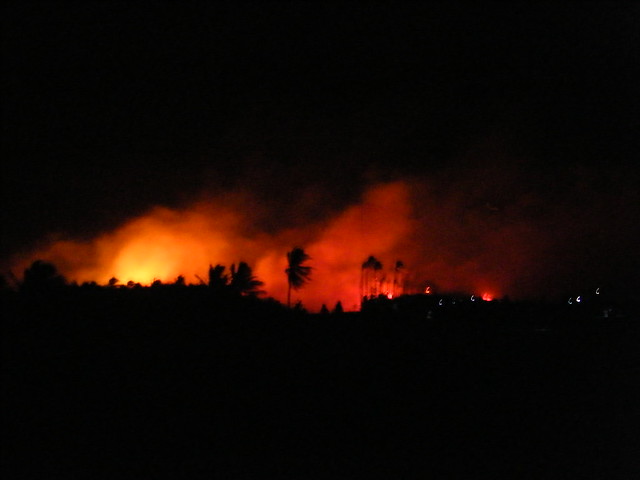