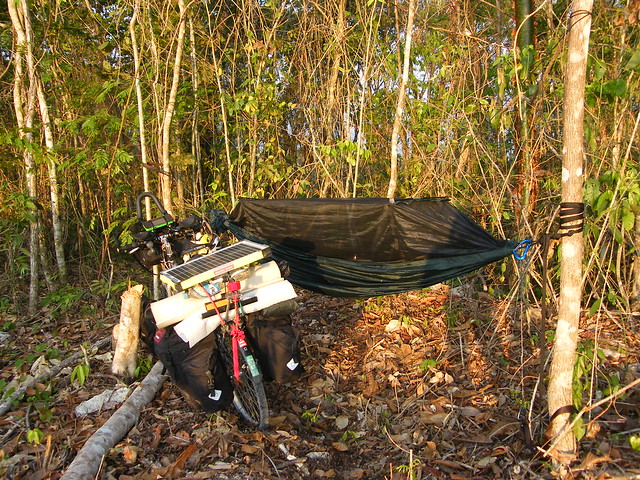 Most cycle tourists use tents, but it is worth considering taking a hammock.

Hammocks are particularly good for use in tropical areas. If there is tropical rain, you do not want to be on the ground. Tents are likely to fill up with water or be washed down the river, as happened to many people I was with in Mexico. They can also fill up with poisonous and biting insects. It is not easy to find somewhere to put a tent in a jungle. Hammocks keep you off the ground, avoiding these problems.

A tarp over a hammock keeps wet and dry gear totally separate. You can organise everything, pack, and unpack in the rain underneath the tarp. It gives you a lot of space to do things like cooking and eating, too. I kept my bike under the same tarp of the hammock. In the photo below, I had my hammock hung over the bike. 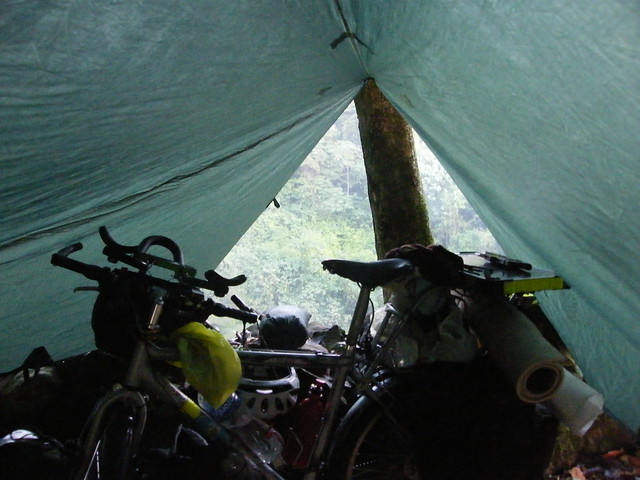 Hammocks can help to keep you cool. Air circulates all around you. If you sleep on the ground, you probably need some sort of padding which will also act as insulation and can feel smothering. If you have enough water, you can even wet the hammock for cooling.

I found my hammock to be very comfortable too. I now prefer it to a bed.

Something people think could be a disadvantage of hammocks is that there might not be anywhere to hang them. I did not have a problem with this on my trip in Central America, and I think it is not likely to happen unless you are in a desert, maybe. Conversely, you could have trouble finding somewhere to put a tent. If you are cycling through a jungle, the only flat ground, if any, will be right beside the road. Obviously this is pretty dangerous, because of the risk of being hit by traffic, and you are an easy target for a robbery. With a hammock you can get off the road and be very well hidden.

A real disadvantage of a hammock is that it is not good for doing anything apart from sleeping. Trying to drink a cup of tea and use a laptop is likely to end in disaster. (Unless you have a tea-proof Thinkpad.) They are also not great for more than one person, at least my one was not. Maybe larger ones designed for this would be ok.

A mosquito net is essential if in any affected area. Some hammocks have built in nets, and it is also possible to buy a net bag that contains a hammock, or to make a net and hang it over a sheet hammock. The bottom of the hammock has to be bite proof too. It seems that having more than one layer of fabric achieves this, even if they are quite thin.

After a bad experience with a tent in Mexico, I tried out some hammocks and decided to buy a DD Frontline hammock.

I like this design a lot. It has a net with zips on both sides of the hammock. The hammock itself is a rectangular sheet gathered at the ends. The net is held above with elastic cords at each end. I found it very comfortable. The net worked well and gave good ventilation and space. It has two bottom layers, which protect against bites, and allows you to put a sleeping mat between them if it is cold.

I was generally very pleased with the design of the DD hammock, but the build quality is not very good. It came with loose threads, and there were some unpleasant ripping noises at times. I’m not sure what it was but it sounded like stitches ripping. There was also a problem with the net, which had larger holes in one area where it had not been made properly. It was not a problem for mosquitoes, but would have let midges in. It is good enough for light use, but I would be a bit concerned about using it for a long time. I think DD ought to offer a sturdier version.

I also tried a Hennessy hammock. This is an unusual design because everything hangs from one horizontal line. The sleeping area hangs below this because of the shape of the material - it is not just a rectangle of cloth. It comes with a tarp that hangs on the same line as the hammock. The one I tried had an entry at the bottom - you get in through a hole underneath. The net was not removable.

I did not like this setup much because it gives very little ventilation and you can’t see out, because the tarp is so close. It is also inflexible. If there are no mosquitoes, it is better not to use the net because it increases the temperature significantly. You can’t take it off with this hammock. With the DD, you can tie it up out the way, or just turn the hammock upside down and not deploy the net at all. It is also not good for sitting in. It may be quicker to deploy though, because it uses the same points for the hammock and two of the four corners of the tarp.

I was not sure whether I should buy a hammock in Mexico or before I went there. The Yucatan is know as a hammock producing area. The hammocks made here are net hammocks, so not mosquito proof, and they do not come with nets. I did not see any nets for sale either, and suspect it may be impossible to find one. The Mexican style hammocks can be comfortable, but it depends a lot on the quality. The cheap ones are pretty bad, but ones made with stretchy strings can be good.

I think the best option is to buy something like a DD or Hennessy hammock, or to make one yourself. The Mexican type ones are probably good for relaxing on a beach, but not for an expedition.

I have not used a hammock in a temperate climate, but a friend has used his DD for cycle touring in Scotland, and recommends it over a tent here as well. He likes it because he can hide in a wood where it is harder to find somewhere to pitch a tent.

If you are going cycling in a tropical area I would recommend you take a hammock. In a temperate area, it could be a good idea as well. 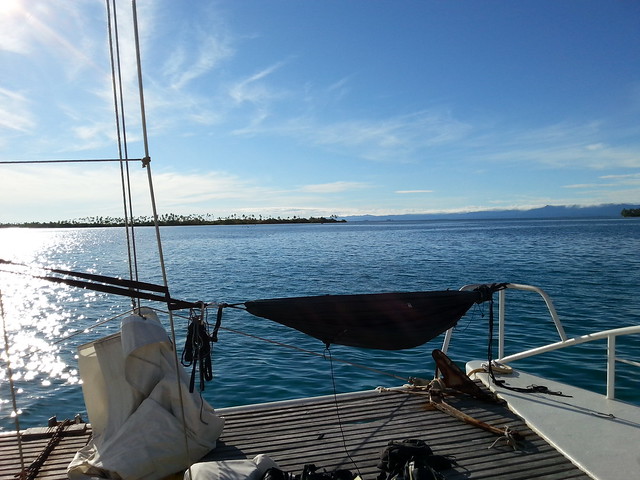