I’ve moved my homepage and identity to river.cat. I’m a cat called River so it make sense, but that’s not what the .cat domain is for. It’s for Catalonia, intended to promote Catalan language and culture. As part of the deal, I’m going to do that. It’s not too hard, because Catalonia has something in common with Scotland, where I am from.

Catalonia is a nation of people located around the area of North East Spain and the border with France. They have been fighting for independence from Spain for some time, much like Scotland has been from England. On the night we awaited the result of the Scottish independence referendum, there were both Scottish and Catalonia independence flags on the Royal Mile in Edinburgh. 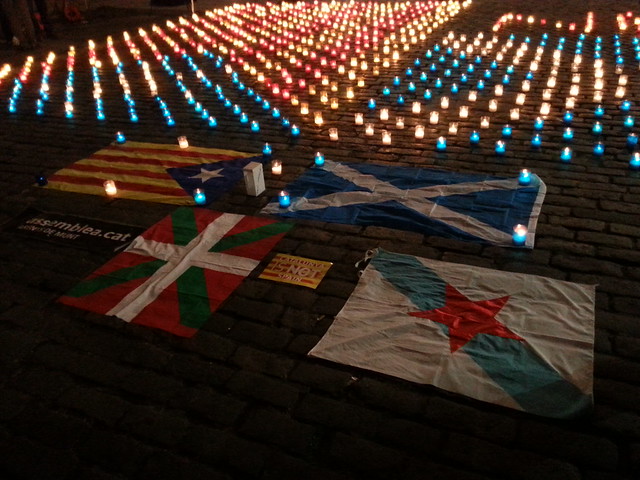 Unfortunately Scotland lost, I think partly because some people were swayed by lies from England of better conditions for Scotland, which were then of course not implemented.

More recently, on the 1 October 2017, Catalonia held an independence referendum which returned 90% in favour. This was after serious fighting with Spanish police who tried to stop it happening by beating voters and stealing ballot boxes. It’s an interesting idea of democracy where a country is attacking its citizens to try and force them not to vote.

The Catalan government declared independence. Unfortunately it seems noöne actually tried to enforce this, and Spain took control. I had hoped that the Catalan police and people would stand up to the Spanish police who were brought in.

The EU supported Spain and turned a blind eye to the violence. Scotland was one of the few countries to support Catalonia. Cabinet Secretary for External Affairs Fiona Hyslop said: “We understand and respect the position of the Catalan Government. While Spain has the right to oppose independence, the people of Catalonia must have the ability to determine their own future. The imposition of direct rule cannot be the solution and should be of concern to democrats everywhere. The European Union has a political and moral responsibility to support dialogue to identify how the situation can be resolved peacefully and democratically.”

I hope we will yet see independent states of Catalonia and Scotland.