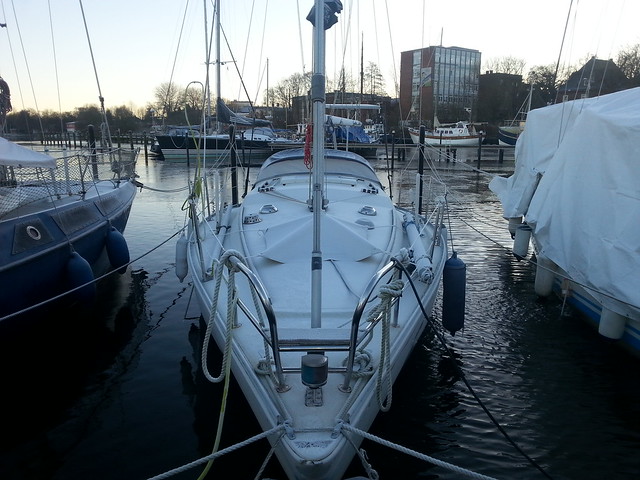 There is sailing, and there is living on a boat. I’ve done both recently, but you might be surprised how little these normally go together. Anyway, this is what I think of living on a boat after doing it for most of a year.

The boat is the first place I have had for myself. It was strange to realise that I now own a fridge, and an oven, and a vacuum cleaner. I’ve been travelling for a while, and still do, but now I do it with an oven. :)

I feel like living on a boat is the way you can have the most control over your environment - the only way you can really own your place. People talk about owning houses, but I don’t think it is really possible, certainly not in places I have seen like British cities. Is it really yours when you have council tax, planning permission, conditions in deeds, factors, residents associations? Some places you have almost no control over what you can do with “your” flat, and are made to pay other people for the right to exist. This is not ownership. With the boat, I can do what I want with it, and put it where I want. Yes, there are harbour fees, but these are optional, and it’s easy to move if you don’t like a place. There is also the ancient right to anchor pretty much anywhere, and except in some places noöne can take money from you or interfere.

I can provide everything for myself. Electricity from solar panels. Water can be collected from rain or desalinated on solar power. Toilets, plumbing, communications is all within your own control. I have my own network on the boat with backhaul by wifi, mobile networks, or potentially satellite or HF radio.

On the boat I have everything I need almost literally within arms reach. I can easily carry food for months. I could, and have, anchored somewhere for weeks without needing anything from the outside world. 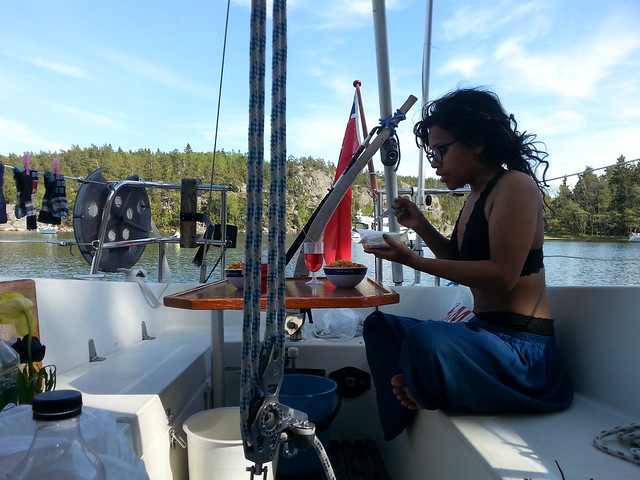 I have also noticed how much energy and water I use, compared to on land. On the boat I have footpumps for water, and can control exactly how much I use. On land, the tap flows constantly while using it, and at a much greater rate. The amount of energy used for heating houses is ridiculous. A whole house can be heated just for one or two people. On the boat, even if I heat it all, the space is much smaller, but mostly I don’t even do that. I blow hot air inside a blanket or cloak, or just sit on an electric blanket. Also tea is a very efficient way to transfer heat into the body.

The main restriction to freedom with the boat life is, I think, simply owning something. Anything, and especially a boat, is something that needs to be looked after, maintained, repaired, stored, checked on… It’s slower to move the boat that to hitchhike for example. Probably the way to be most free is to have nothing and trust in the universe. It probably comes with less comfort than always having your own bed with you when you travel, though.

Most of the time on the boat I was living with a girlfriend. I think this is a good idea and works well as long as you get on well enough. More recently though I’ve been on my own, which I also like. It’s an excellent way to be a hermit. After my first passage on my own I tied up on a small lake off the Kiel canal. There were no other boats there, and I was very happy on my own. I had a party with myself and the boat and the lake and the trees.

Problems I’ve had with this particular boat more recently are condensation and mould. Living on a boat in the winter it really should be insulated. It’s also cold, but now that it is properly cold, I actually sort of like the ice on the windows and frost on deck.

Another thing I like is the general awareness of nature that comes from being on the boat. Apart from explicitly checking the weather when sailing, I still notice much more just being on the boat. I discovered seasons are a real thing. This is largely because of being in Scandinavia instead of Scotland, where we only have a vague idea of seasons - winter is a bit wetter and colder, but it is a gradual thing and just a matter of degree. Around Scandinavia it can be Summer one day and Autumn the next. On Samhain eve (the end of Summer / Autumn) it was warm, in the morning there was ice on the deck. I notice the temperature of course, but last night I woke up because the wind changed. The boat makes slightly different sounds, the waves slap the hull from a different angle, things tap differently. Even when tied up somewhere calm with no plans to sail I still feel where the wind is coming from when I’m asleep.

Another good thing about a boat is that you can avoid winter totally if you want. Just move house to where it is Summer at that time of the year! 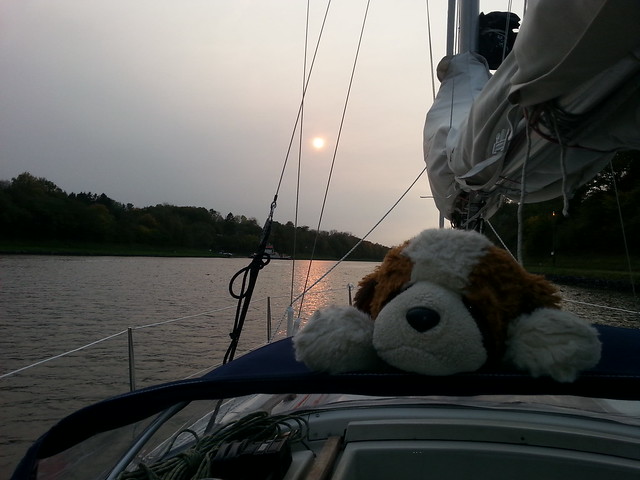