This evening I tested the antenna system described in my last post, as well as a 2m J-pole.

Immediately on leaving the house I was answered on 2m by GM8OTI. This was an unexpectedly good start - most often when I have tried 2m bike radio I get nothing. The J-Pole was probably much better than previous antennas and he said he had seen my post on SOTA watch so was expecting me. I extended only one section of the mast for the journey, which was just enough for the J-pole.

I planned to operate in the vicinity of Newhaven Lighthouse in the hope that proximity to sea water would provide a good ground plane. When I arrived at the lighthouse I could start operating very quickly as I only had to extend the mast. This is in contrast to the usual faff of setting up for SOTA which involves guy lines.

The band (15 meters) sounded dead - I heard no stations at all. I thought conditions must be bad but I tried calling CQ anyway and, although rather slow, I got some results!

I had never heard the CO prefix before but didn’t think much of it until I got home and looked it up. QRZ.com tells me C06LC is in Cuba, 4441 miles away. I think voltage was down to about 10V or less at this point so I probably wasn’t even using the nominal 5W I usually claim. I think that is my furthest contact - QRP or otherwise. It’s at least 888 miles / watt and probably over 1000. 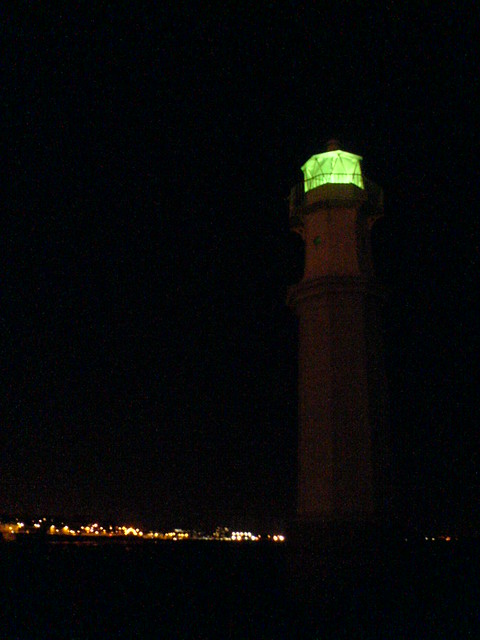 Effectiveness varied greatly with location. Near the lighthouse was good but when I tried moving north west along the coast it was far worse. I heard N8YHY at S1 - when I moved back to the lighthouse it increased to S8.

I spent some time after these contacts listening on bands from 160m to 10m. I was surprised to hear stations on 160 meters with my short antenna - one who sounded English on SSB and several morse which I didn’t try and decode. I also tried adding a miracle whip tuner. I think it tuned on 17m and 20m but battery was now flat so could not test properly.

It was generally a pleasant evening - warm and dry but windy. The sky was clear giving good star display and a shooting star. There were some very good photos I would like to have taken - with railings, bike and mast in the foreground, lighthouse beyond that and stars behind - but my camera phone was not up to the job. I was not, on this occasion, questioned by police or public about my unusual activities, nor about the fact my bike had wires on it. As we now know, wires are evil unless they come in a box with the name of a big company on it.

In conclusion, I declare this operation successful and intend to experiment further. 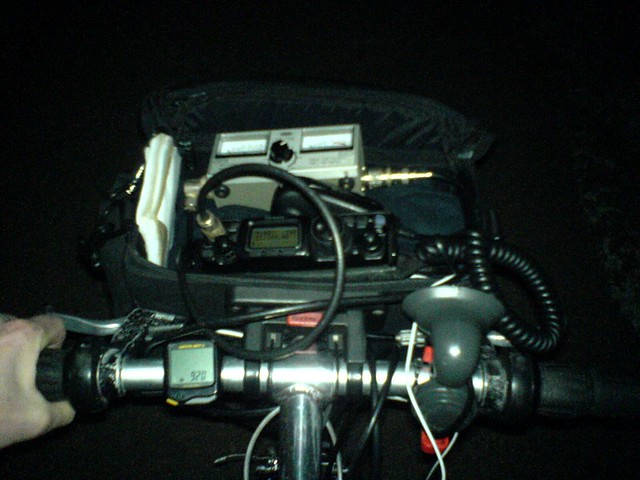 For future reference / comparison, the solar data from N0NBH for this evening (2115 UTC I think it was but I can’t find historical data to check) was:

15 meter conditions were pronounced to be fair.