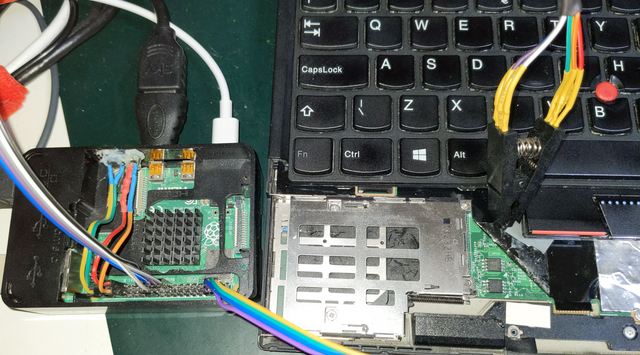 The bluetooth adapter that comes with the Thinkpad x230 is bad. The range is barely enough to reach from desk to ears. Also, I had trouble with the device disconnecting when I pressed the case wrong. It’s held in by one screw on a precarious connector.

Largely for this reason, and for bonus faster wifi, I decided to upgrade the wifi card to an Intel AX210, which is about as new and fast as it gets. The card also has bluetooth and uses the main antennas for this, rather than the poor PCB trace on the original USB connected one.

The Lenovo firmware does not allow using this card, so it was also an opportunity to flash Coreboot to the machine. This was not quite straightforward, but not terribly difficult. The installation instructions did not correspond to the reality very well, but I managed to work it out. I also needed to upgrade the linux kernel for support of this card.

The other major problem I had was after using the SOIC clip, the machine would not boot. The power light around the power button flashed three times, but otherwise no sign of life. It turned out this was because I had broken off two resistors which are close to the flash chips. Searching the web I found I was not the only one to do this.

Luckily, I was able to find a circuit diagram for the thinkpad and I had suitable replacement chips. Note: the diagram was found easily on google - the first result in fact - but duckduckgo returned only some terrible spam and malware bait links.

For reference, the resistors in that area are:

I also replaced the fan with what seems to be a genuine AVC one, which was rather difficult to get hold of, but I deemed necessary after a terribly noisy cheap fake Delta one.

The machine is working well again now. Bluetooth works with my headphones from desk to the garden. It’s quiet. I am pleased.