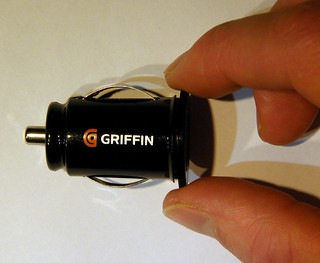 After my previous teardown of an MC34063 based cigarette lighter port USB power supply showed it to be inadequate I still needed a USB supply. I thought I would buy another one of these devices but this time a branded one that cost more than one pound.

I chose what was claimed to be the Griffin PowerJolt Dual Universal Micro. It is specified as having 2A output (1A per port). Since I wrote this article, several people have pointed out that they think I got a fake. I suppose a good quality one would cost more that the £2, including postage, which I paid on ebay. 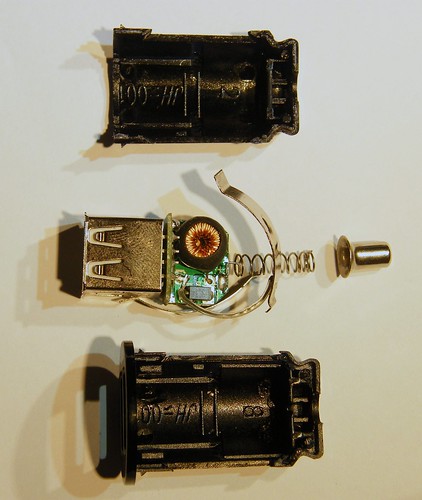 A bad power supply can destroy expensive equipment so this is a case where “don’t turn it on, take it apart” is very good advice.

My first impressions were the bad soldering. The joints are mottled and balled up. Then I noticed an odd lump of solder that had been trimmed with side cutters. This was on the end of a wire from the inductor (a toroid) and was not secured to anything. A thin piece of solder extended to one pin of the IC, and if the wire was pressed against the board this may have made contact. Looking at the PCB, the solder mask goes right up to the hole for this wire. I suspect a faulty PCB design and this is some bodge that might make it work sometimes if it doesn’t come loose. 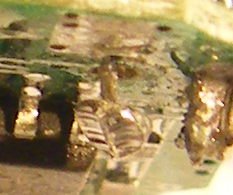 The IC is marked O&P 1510 2B23. I can’t find it by googling. The capacitors are tiny. I expect the filtering would be bad. There is no fuse. Griffin says it has “SmartFuse circuit-breaker protection”, so I was expecting a separate protection device, such as a polyswitch, which is not there.

I was going to test the output voltage, current and ripple, but the thing won’t even work without me fixing it first, so I’m probably not going to bother.

You need to pay more than £2 for something that is not crap. There are imitation branded electronics on ebay.