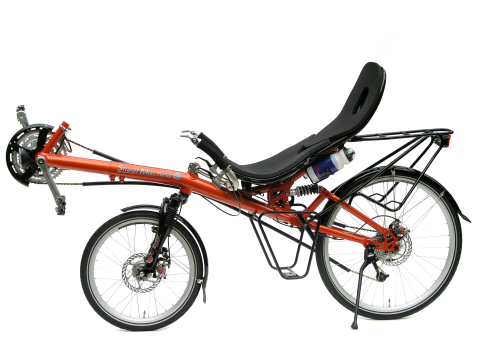 I’m looking for a bike to become River Song, which is what I think I’ll call my technomadic geek world touring platform.

Today I went to Glasgow to test ride an HP Velotechnik Streetmachine Gte at the Kinetics bike shop. From what I have read this bike seems to be a highly rated world tourer. It’s an under seat steering short wheel base, with full suspension.

I think I want under seat steering because it seems more comfortable. I am lazy and would rather not have to hold my arms up to the handlebars. A short wheel base makes the bike easier to maneuver, particularly in cases such as putting in on trains or other vehicles and taking it into hotel rooms.

Suspension is interesting. I’m not sure if it’s really useful if the bike is just used on the road and it adds complexity and weight. It might be good for landrover tracks and dirt roads. I went quite fast down a potholed road and it seemed to work quite well. The rigid frame Bacchetta was not uncomfortable either though, presumably because of the seat padding. I suppose a more reclined position may make suspension more important because the force goes more through your back rather than a cushioning gluteus maximus. I was riding both bikes without luggage. The suspension might also matter more if the bike is heavily loaded.

I thought I would really like this bike but I’m afraid I didn’t. I had some particular problems with it and I wasn’t sure about the overall feel. When steering at low speed my heel hit the mudgaurd. This would not be a problem if I had longer legs but for me the boom was almost fully in. After only about 10 minutes on the bike I already felt a pressure point on my back, at the corner of the seat from the bum part to the flatter back section. This is quite concerning because feeling something after so little time means it would probably become a serious sore after constant riding. It might be possible to fix this by changing the padding though. It had the basic foam pad velcroed onto the fiberglass seat. There is also a mesh pad and another type of seat available.

Another concern I had about the Streetmachine Gte was that it’s made of aluminium alloy, rather than steel. Everything I read about choosing a touring bike frame says that steel is better because it is less likely to break, and if it does it can be repaired by any welder in even very remote places. Aluminium requires a TIG or MIG welder which are much rarer. The previous version of the bike, the Streetmachine Gt, was steel. I emailed HP Velotechnik to ask why they had made what seemed to be a change for the worse and received the following reply.

we changed the material as we discovered, that our frames will last even longer with the new 7005 Aluminium. Doing this, we extended our frame warranty from 5 to 10 years.

I don’t really know much about metal, but it seems that aluminium fails from repeated flexing. If the frame is designed to be rigid enough that it doesn’t flex, then it won’t break because of this. Presumably HP Velotechnik have done of good job of this design and in practice it is probably not a problem.

I also tried a Bacchetta Bella. This is a long wheel base, over seat steered bike with a more American style upright seat. I didn’t expect to like it but I did. It was easier to control than the Streetmachine. This probably doesn’t matter with practice but it was noticeable as a beginner recumbent rider. I preferred the general feel of it. I could also imagine mounting a computer screen or tablet on the handlebars.

I now know that I’ll have to try some more bikes before I make a decision about this.