The fan in my x60s had started to sound rough. I was worried it was going to die soon, which would be very inconvenient when cycle touring or in mid-nowhere. I thought I should probably replace it but decided to try and fix it first. The plan was to clean and oil the fan, and replace thermal paste.

First I had to extract the fansink, the combined fan and heatsink assembly. This was quite a large job because it involved removing nearly every other part of the computer. It was interesting to see inside though. It was made easy be the excellent service manual which I downloaded. Be very careful when unscrewing the fansink. Use a screwdriver that fits well and support the points you will be pushing down on with something underneath the board. I didn’t and heard a nasty cracking noise. I’m surprised that the solder connections to the CPU were not broken when the board bent, but luckily it doesn’t seem to have caused any problems.

I then had to access the fan. It was not designed to be removed from the fansink but it was possible by bending the metal tabs which held the case over the rotor, and peeling back some foil tape. 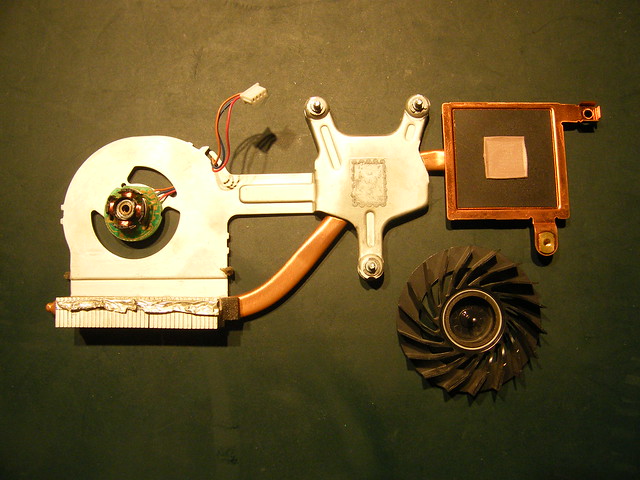 I cleaned out quite a lot of dust which had built up by the fan blades and in the heatsink fins. I then applied 3 in 1 oil to the bearing surfaces. 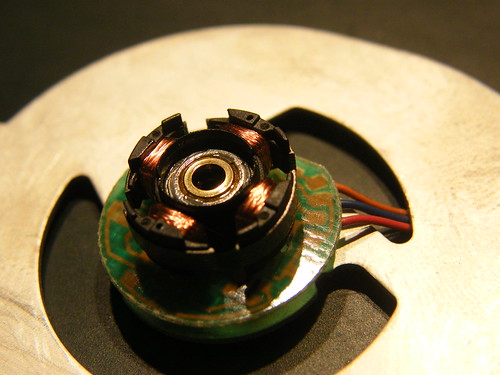 Replacing the heatsink requires replacing the thermal paste, and I expected that doing this well would improve cooling in any case. It should reduce the thermal resistance from silicon to heatsink and therefore the fan could maybe run at a lower speed, prolonging its life. I used Arctic Silver 5 as it seems to have the best reputation and reviews.

Arctic Silver give application instructions for various CPUs, but not for this one. I wrote to them and they said to use, for a Core Duo in a laptop, the surface spread method. Before applying I thoroughly cleaned the surfaces with isopropanol, which has proven useful for many other electronics applications. I was excited to discover I actually had one of these mythical “soft lint free cloths”. In real life it’s called a camera lens cleaner. 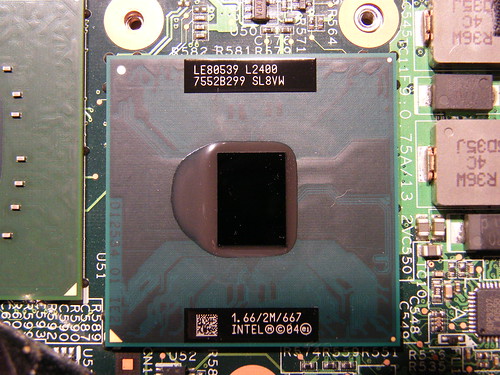 The memory controller is also cooled directly by the fansink. It has a thermal pad instead of paste. I did not replace this because I didn’t have another one. I was careful to try and keep it clean though. Dust matters.

After reassembling the computer, it’s a good idea to test it. I used prime95 to heat the CPU. It’s a mersenne prime finding program, but also seems to be popular with overclockers who want to test cooling. It has menu options specifically for this. memtest86 can be used to test memory. I ran prime95 while monitoring temperatures with watch sensors, in a linux shell.

I am pleased with the result. The fan is now quiet, but not perfect. I think the bearing is a bit worn, but it should last for much longer than if I had done nothing. The CPU temperature now sits around 41C idle. I recommend you carry out this procedure at the first signs of fan wear, as the oil should reduce further damage that would otherwise occur more quickly.

Keeping the computer cool should also extend its life. The Arrhenius equation applies to component failures.

Now, I should try and avoid gunk build up in the fan by not using the computer: in bed, in sand dunes, in caves, in a forest…

I have also written about oiling the X61 fans.