I have been designing power supplies and testing solar panels recently. An easily and finely adjustable constant current load is very useful for these tasks, so I made one. 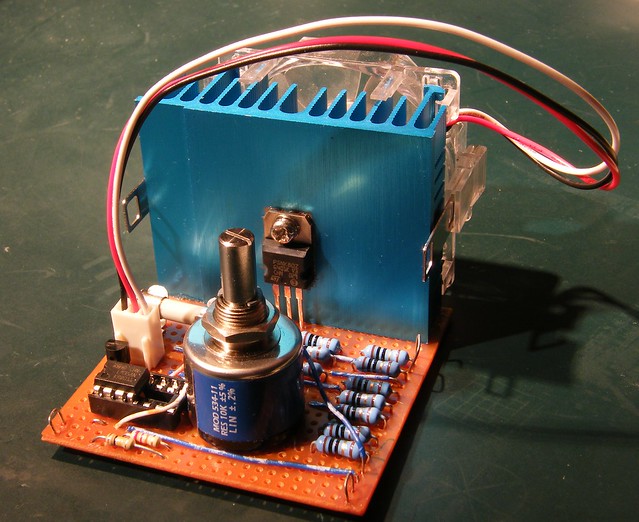 My design is basically the same as shown in this EEVBlog video, except I run the opamp at 12V, with resistors changed appropriately, and use a 10K pot. The 12V supply, from a 78L12, also powers a cooling fan. I added a 2A fuse.

The heatsink and fan are taken from a CPU. I drilled and tapped the heatsink to mount the MOSFET, and used thermal paste. It works well.

The main problem I had with this circuit was selecting a MOSFET. Initially I used an IPP114N03L G. I chose this based on the headline V and I specifications, and thermal calculations of power handling. I then learnt that there are more restrictions on the operating conditions of MOSFETs, which are shown in the Safe Operating Area graph. I replaced it with an STP5NK80Z. It’s not ideal because of relatively high Rds (on) but it’s what I could get that would handle the load.

The device now works well and has been used many times already. It would be convenient if it had a current meter though.