I read hacker news frequently and was generally aware of NoSQL databases. I had a feeling I should learn at least one of them but did not have a real plan to do so yet. Partly, this was because I hadn’t decided which one would be the best investment of time. 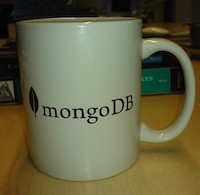 Then, one day, I found myself in the middle of a MongoDB tutorial and using a live database. What? How did that happen? I had accidentally the MongoDB. I note I also have a MongoDB mug - I don’t even know exactly where it came from.

This got me thinking about the marketing of open source products and how in this case it had been done so successfully. Looking back, there are many things people had done to get me to this point.

First, MongoDB showed up often on hacker news. In particular, this interactive tutorial appeared. I thought it looked interesting and clicked it despite not really planning to do a tutorial at this stage. Instead of instructions to download and install packages, run commands and copy code in a webpage, I was presented with an initially rather bare screen. Within a few seconds though instructions started to appear. I was told “It’s easy, just enter db.getCollectionNames();” How could I not do something so simple?

From there, the tutorial progressed, building up to more interesting tasks, each slightly more complicated than the last. This method of using small prompts avoids overwhelming the user and draws one in. After doing one or two, I kept going to see what interesting feature I would discover next. There were puzzles to solve and immediate feedback.

Where did this tutorial come from? Well it was made by Karl Seguin. Why? I don’t know but presumably he enjoyed using it and could see that Mongo was something people were interested in learning. He may well have thought that because of hacker news activity. Maybe he wanted to get a job.

That’s an important reason why someone may want to learn a technology - to get a job at a company that uses it. If the sort of companies that hackers like (startups doing something exciting) are using your software then hackers will be more likely to be interested in it and promote it for you in things like their blog posts. The moral would seem to be solve problems cool companies have. This is related to Paul Graham’s Startup Ideas We’d Like to Fund “30. Startups for startups”.

So why does Mongo show up so much on hacker news to start with? I suspect it is largely because it is a good product. It is the sort of thing hackers enjoy using. It is probably also something to do with the 10gen team making an effort not just to develop it but to promote it. Note how many people have the words “marketing” or “community” in their blurb. Compare Couchbase, which only lists leadership and technical teams. Marketing is mentioned only once on the leadership page.

Compare the CouchDB and MongoDB websites. Couch has fairly dense text (although I do like the architecture diagram up front) whereas Mongo is rather prettier. Also note the “Try it out” button at the top of the Mongo page, leading to a shell.

Compare also the websites of Couchbase and 10gen, companies which support Couch and Mongo respectively. 10gen has “Download” and “Learn” buttons. Couchbase has, ironically, only marketing speak.

So what have I learnt from this? Make your product hacker friendly. If people like it they will promote it for you. Make it ridiculously easy to start learning it. Let people know what it does quickly, with a well designed website.

As for the mug, it must have come from a conference someone in the office went to. I would like to think this would not change my opinion on what makes a good database but we know it does.